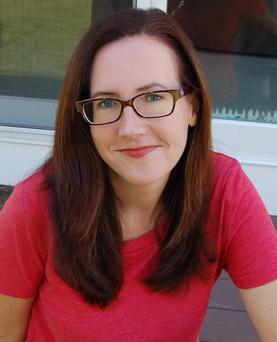 Kim Harrington is the author of Clarity, Perception, The Dead and Buried, and Forget Me for teens and Revenge of the Red Club, the Sleuth or Dare series, and Gamer Squad series for kids. She lives in Massachusetts with her husband and son. When not writing, she's most likely reading, watching one of her favorite TV shows, or fantasizing about her next vacation. Her first book, Clarity, received a starred review from Publisher's Weekly, was a 2012 ALA Quick Pick for Reluctant Readers, sold to nine countries, and was optioned for television by Warner Brothers.

Random Fun Facts:
- I am a lefty.
- My mother is from Ireland and has the coolest accent ever.
- I love the smell of coffee, though I hate the taste.
- I am a Disney World fanatic. I’ve been there 20 times.
- I have a very sensitive sense of smell. I once threw up on the sidewalk while
walking past a fish market.
- I don’t eat seafood (see above).
- I love to drink Shirley Temples.
- I would love to go on The Price Is Right.
- I am the pickiest eater on the planet.